The Office of the UN Resident Coordinator in the Republic of Kazakhstan operates under the UN Resident Coordinator’s strategic guidance and it supports establishment and implementation of mechanisms that ensure all members can fully participate in UN country team (UNCT) consultations and decision-making processes and are informed through regular communications and information sharing.

The RC with strengthened authority and leadership, is the highest-ranking representative of the UN development system at the country level and is the designated representative of – and reports to – the Secretary-General. They are responsible for the coordination of operational activities for development of the UN in support of countries’ efforts towards implementation of the 2030 Agenda; they lead and supports the UNCT in the development, monitoring and reporting of the UN Cooperation Frameworks. (S)he coordinates the UNCT’s implementation of the UN Cooperation Framework, and works with UNCT members to ensure alignment of both agency programmes and inter-agency pooled funding for development with national development needs and priorities, as well as with the UN Cooperation Framework and 2030 Agenda. The RC supports, catalyzes and advocates for the work of UNCT members and supports all UNCT members, including Non-Resident Agencies (NRAs), in reaching their agency-specific goals. The RC leads the UN Country Team in consultations with the host Government to define and agree on the UN’s strategic response to the government’s priorities. On the basis of these country-specific responses, the RC also has a role in facilitating a dialogue between UNCT members and government counterparts on country-level presence of the UN development system, to ensure an effective, efficient and responsive field structure.

The Office of the UN Resident Coordinator in Kazakhstan fulfills the following five key functions in support of the responsibilities of the RC and the UNCT:

Under the United Nations Interim Administration Mission in Kosovo (UNMIK), Ms. Friberg-Storey also headed the Election Field Operations of the Organization for Security and Co-operation in Europe (OSCE), held the position of Director of European Union Integration Office, and served the United Nations Special Envoy for Kosovo. 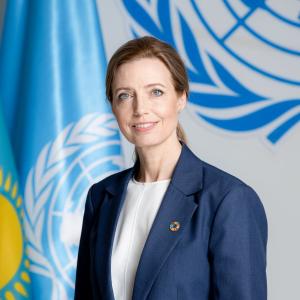